A concert to celebrate the choir’s fifteenth birthday 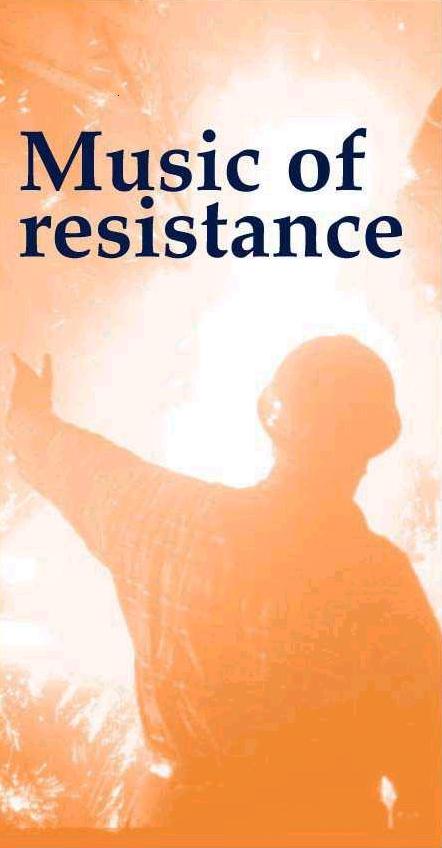 It is not perhaps an exaggeration to say that the history of the last century was characterised by tyranny, particularly in Russia, Europe and Latin America, and the corresponding call to resistance. In tonight’s concert we present an array of poets and composers who were particularly responsive to the need to give artistic expression to such resistance.

Tsarist Russia at the beginning of the century was a hotbed of revolutionary fervour, and the abortive nature of the 1905 revolution did nothing to quench the outpouring of poems supporting the uprising, some admittedly of questionable artistic value. By contrast much of the poetry of the French Resistance movement came from the pens of well-known writers such as Paul Eluard, and his friend Poulenc, himself living under the indignity of the Nazi occupation, tried to play an equally direct role in bolstering the morale of the Resistance through his compositions.

By the 1950s, the Tsars had long been replaced by Stalin’s equally repressive regime, at the hands of which Shostakovich suffered direct and personal abuse. His reaction was at times to compose abstract music (such as the string quartets) into which he could pour his innermost feelings at the same time as trying not to offend his ‘artistic’ masters. But he also composed semi-official music, in an attempt to keep a semblance of kowtowing to authority, at the same time casting his true feelings in coded references to the contemporary political situation.

In more recent times, the Chilean Ariel Dorfman is one of many great Latin American writers who have given a voice to the repressed peoples of their continent. And James Macmillan – Scotland’s leading composer of the younger generation – although not personally labouring under an oppressive regime, has found a particular affinity with the Latin American experience, through his strong Catholic faith. Certainly there is little in the sentiments of Dorfman’s poetry that would not have found an echo in Russian hearts some 80 years before.

The end of the Second World War was followed, in the USSR, by the tightening of ideological controls and artistic repression. In a decree dated 10 February 1948 a number of prominent composers, including Shostakovich and Prokofiev, were accused of representing ‘most strikingly the formalistic perversions and anti-democratic tendencies in music’, namely the ‘cult of atonality, dissonance and discord … infatuation with confused, neurotic combinations which transform music into cacophony’. The accused composers at least nominally recanted, each in his own way. Shostakovich admitted that he had tried to eradicate the ‘pernicious elements’ in his music, but the ‘reconstruction’ was not complete: ‘Certain negative characteristics in my musical style prevented me from making the turn … I again deviated in the direction of formalism and began to speak a language incomprehensible to the people … I know that the party is right … I am deeply grateful for the criticism contained in the resolution’. Like most of the composer’s public pronouncements, one sees the hand of officialdom in their composition, not his own personal feelings.

Nonetheless, the decree of 1948 dealt a stunning blow to the creative life of Soviet music. For the next five years composers displayed great caution so as not to offend the party hierarchy. In practical terms, Shostakovich began to use two musical idioms: one more simplified and accessible to comply with the guidelines of the decree, the other more complex and abstract to satisfy his own artistic standards.

Choral music was almost a requirement every composer had to fulfil in order to remain faithful to ‘Soviet Realism’. In 1950 a small book was published in Leningrad: Anthology of Revolutionary Poets of the End of the Last Century and the Beginning of This One. Shostakovich credited the genesis of his Ten Poems to the intensive study of revolutionary poetry he made while writing the music for revolutionary films. However, while he described the underlying theme as the 1905 revolution – he reused some of the material in his 11th Symphony ‘1905’ – some of his contemporaries had no trouble divining a current relevance in the texts in the similarly repressive 1950s.

The Ten Poems was Shostakovich’s first concert work for unaccompanied choir, and echoes can be heard of Musorgsky and Borodin (composers who particularly influenced him) as well as Rachmaninov’s choral writing. The work was awarded the Stalin Prize (Category 2) in 1952: however we have chosen to present just six of the poems, omitting those that go furthest in appeasing the dictator’s taste for the demagogic style.

‘In writing this work I wanted to compose something which was both timeless and contemporary, both sacred and secular. The title (‘sacred songs’) is therefore slightly misleading as the three poems are concerned with political repression in Latin America and are deliberately coupled with traditional religious texts to emphasise a deeper solidarity with the poor of that subcontinent.

It was my interest in liberation theology which made me combine the poems of the Mothers of the Plaza de Mayo in Argentina with the texts of the Latin mass in Busqueda (an earlier music-theatre work) and has now led me to attempt a similar synthesis of ideas in Cantos Sagrados.

The voices in Ariel Dorfman’s poems belong to those who suffer a particular type of political repression: the ‘disappearance’ of political prisoners. Ana Maria Mendoza’s poem about the Virgin of Guadalupe tackles the same problem by asking a more fundamental cultural and historical question.’ (James Macmillan, Glasgow, 1990)

Paul Eluard (1895-1952) was one of the founders of the Surrealist movement, but after the Spanish Civil War he abandoned Surrealism in favour of political militancy. His later work reflects the deepening of his attitudes – the rejection of tyranny and the search for happiness. In 1942 he joined the Communist Party, and his poems dealing with the sufferings and brotherhood of man were circulated clandestinely during the Second World War, serving to strengthen the morale of the Resistance.

Francis Poulenc, too, remained in occupied France during the War and demonstrated his ‘resistance’ by his own artistic means, among other things dedicating his Violin Sonata to Lorca (who had been murdered during the Spanish Civil War). Poulenc was greatly influenced by Eluard’s Resistance poems, and in the summer of 1943 set eight of them to form this cantata, by any measure a masterpiece of its genre. He later recounted its genesis in an interview:

‘I had the idea of composing a clandestine work which could be prepared and printed in secret and then performed in the long-awaited day of liberation. With great enthusiasm … I composed the work for unaccompanied choir because I wanted this act of faith to be performed without instrumental aid, by the sole means of the human voice … My friend and publisher Paul Rouart agreed to print the cantata in secret, and this way we were able to send the music to London where, before the end of the war, in January 1945, it was broadcast.’

The cantata opens with a poem that opposes a dark night of the soul and of France to the hope of a spring that might banish the ‘monsters’. Against this gravity, the second number opens as a scherzo, setting a poem about young girls leaping, on a ‘great joyous day’ from death, corruption, and degradation. The third poem concerns death in the heart and shame in the mind, and Poulenc’s setting initially creates a sense of oppression, even of suffocation; but the final words of the poem are echoed high in the first sopranos, to emphasise that only human beings themselves may confront darkness with hope. This is linked to the next poem about the seed nurtured patiently in the earth, where it ‘prepares for vengeance a bed where I might be born’.

The fifth poem is both angry and appalled, and Poulenc’s setting is marked ‘very fast and violent’, exacerbated by antiphony between the choirs. They come together only twice, when we are told that ‘the wise men are ridiculous’. The lovely sixth poem describes how the paw-marks of an animal in the snow presage ‘the imprints of life’, although the melodic lines grow tortuous as they seek ‘a track of life’ through death itself. The penultimate poem is the longest so far, and tells how death is the god of love, and ‘the victors in a kiss swooned on their victims’. In the final radiant section, the music describes how children are no longer afraid, and stupidity, madness, and baseness give way to brotherly men who no longer strive against one another and against life.

A long pause is asked for before the setting of the final poem, ‘Liberté’ – the clarion-call of the French Resistance. Starting from his own desk, the poet gradually embraces the wider world, in his descriptions of the multitude of places upon which to write ‘your name’. However it is only in the final ecstatic bars that we learn that ‘through the power of a word I begin my life again. I am born to know you, and name you LIBERTY.’